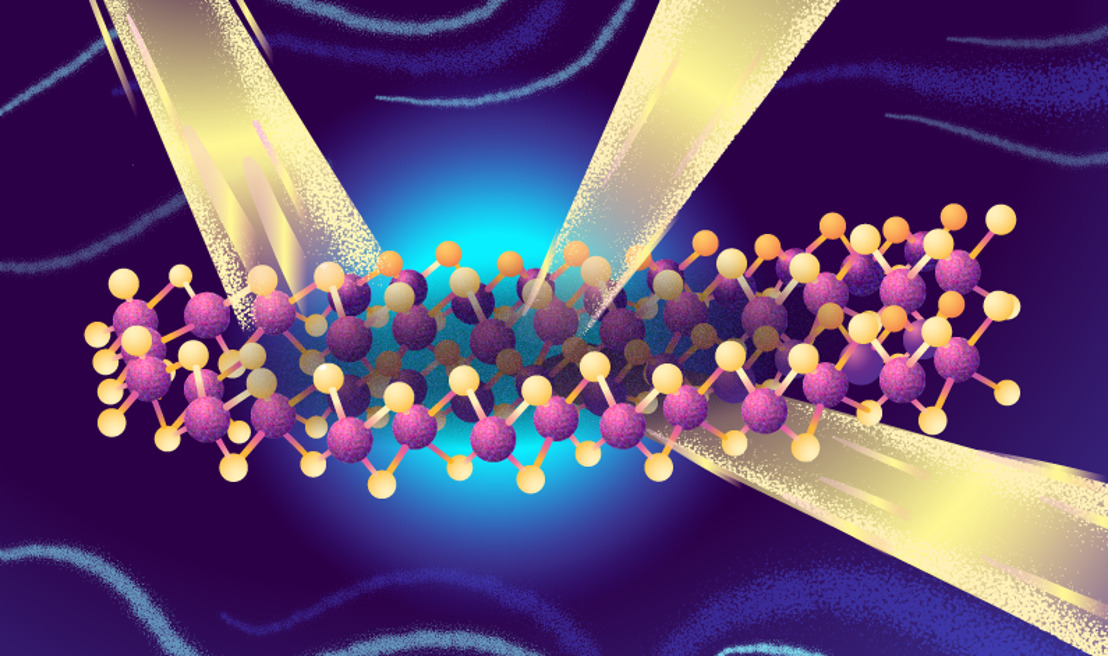 Researchers of the Center for Photonics and Two-Dimensional Materials at MIPT, together with their colleagues from Spain, Great Britain, Sweden, and Singapore, including co-creator of the world's first 2D material and Nobel laureate Konstantin Novoselov, have measured giant optical anisotropy in layered molybdenum disulfide crystals for the first time. The scientists suggest that such transition metal dichalcogenide crystals will replace silicon in photonics. Birefringence with a giant difference in refractive indices, characteristic of these substances, will make it possible to develop faster yet tiny optical devices. The work is published in the journal Nature Communications.

The Scandinavian Vikings were the first, among others, to observe polarizing effects in optics. They discovered that objects appeared doubled when viewed through Iceland spar (clear calcite). That phenomenon was later called birefringence. The effect is due to the asymmetrical arrangement of atoms in some materials. As a result, a light beam refracts differently in the material,depending on the direction in which it propagates, splitting  into two linearly polarized beams (the ordinary and extraordinary) and creating a doubled image.

It turns out that the phenomenon of birefringence is very practical. For example, the Vikings used  double refraction of some crystals for navigation. Present-day liquid crystal monitors use the birefringence effect in liquid crystals to create images. The phenomenon is also used to build polarizers, wave plates, and other optical components. It is desirable that the refractive indices of ordinary and extraordinary beams differ as much as possible - then the desired effect can be achieved when light passes through a thinner plate, thus helping reduce the size of the device, and in some applications, increase its speed. Researchers have recently demonstrated the possibility of building ultra-compact waveguides with anisotropic materials to reach and even overcome the diffraction limit. The effect requires materials with a birefringence value greater than 1. So far, the BaTiS3 perovskite layered crystals and the hexagonal boron nitride h-BN have held the record for birefringence (0.8). The desire to make modern optics more and more compact has stimulated the search for natural materials with huge optical anisotropy greater than 1. Transition metal dichalcogenides are extremely promising in this respect. These compounds based on sulfur, selenium, tellurium, and 3d-elements of the Mendeleev’s Periodic Table have a layered structure. For example, molybdenum disulfide (MoS2) consists of alternating layers rotated with respect to each other by 1800 and held together by weak van der Waals forces (Figure 1).

"From the task of measuring the optical properties of molybdenum disulfide, we have arrived at a completely different problem - namely, to study anisotropy and find promising applications of the anisotropy of such crystals in photonics," Georgy Ermolaev, Ph.D. student at MIPT and first author of the study, explains the authors' motivation. This anisotropic structure could not but affect the material’s optical properties. This fact was known already in the second half of the twentieth century. However, quantitative measurements of the anisotropy were non-existent. That was due, among other things, to considerable experimental difficulties. To overcome them, the researchers combined methods of near and far electric fields. In other words, in addition to irradiating the material at different angles and detecting the signal, the authors studied the propagation of waveguide modes in the material. This approach enabled them to unambiguously determine the birefringence of the material, which is 1.5 in the near-infrared and up to 3 times in the visible range. These values are several times greater than those of previous record-breakers.

"We used a combination of techniques - spectral ellipsometry and near-field optical microscopy and verified our data with numerical calculations. The work required the efforts of a large number of scientists from different scientific teams in different countries and with different competencies. For all of us, this work was the beginning of large-scale research on anisotropic transition metal dichalcogenides nanophotonics," commented Aleksey Arsenin, a leading researcher at MIPT.

The data obtained were compared with quantum calculations, which, to the researchers’ surprise, produced exactly the same result, thus confirming the correctness of the constructed quantum mechanical model of layered materials and suggesting that the theory and conclusions published in the article are applicable to the entire class of transition metal dichalcogenides.

The researchers have completely rediscovered for the world a class of materials with enormous optical anisotropy. The discovery offers an additional degree of freedom in the development of compact photonic devices and. For example,  it makes it possible to reach the diffraction limit in optics for wave-guiding systems with characteristic dimensions of about 100 nanometers.

The work was led by Professor Valentyn Volkov. He moved from the University of Southern Denmark to MIPT in September 2019 to head the Center for Photonics and Two-Dimensional Materials. "Whereas previously we were limited to changes in geometry and effective refractive index to create new optical circuits and devices, giant anisotropy provides an additional degree of freedom to manipulate light," says Volkov. - "Unexpectedly, we found out that naturally anisotropic materials enable us to build compact waveguides literally on the edge of the diffraction limit. It gives us an opportunity to compete with silicon photonics. Now we can safely not only talk about post-silicon photonics but also implement it."