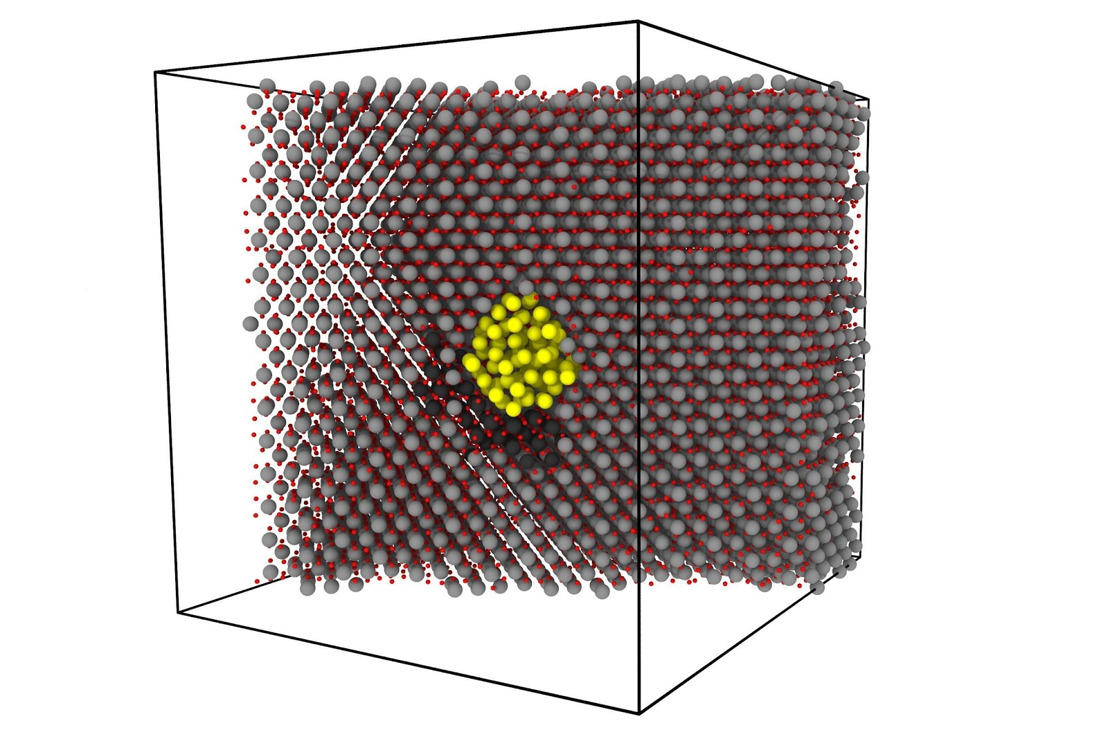 Scientists at MIPT have found a possible explanation for the anomalously fast release of gas from nuclear fuel. Supercomputer simulations have uncovered an unexpected mechanism for accelerating the escape of gas bubbles from the uranium dioxide crystal matrix to the surface. The result points the way to eliminate the paradoxical discrepancy of several orders of magnitude between existing theoretical models and experimental results. The paper was published in the Journal of Nuclear Materials.

The diffusion of gas bubbles during reactor operation is one of the important topics in nuclear power relating to radiation safety. Bubbles of gaseous fission products (mainly xenon), accumulating in the fuel, affect many of its properties. Therefore, it is important, in the design and operation of reactors, to know how fast the gas escapes from the fuel.

Despite the active work of various scientific groups in this field, there is still no complete understanding of the mechanisms of diffusion of gases in fuels. The recent series of works by French researchers is a striking evidence of this fact. The results shown by their proposed model are dozens of times lower than those measured in special experiments. "The very fact that such contradictory results and, in fact, unworkable theory have been published demonstrates, on the one hand, the scientific community’s great interest in this problem and, on the other, the need to find fundamentally new physical mechanisms of ultrafast diffusion," says MIPT professor Vladimir Stegailov.

The MIPT scientists led by Vladimir Stegailov were able to simulate the diffusion of xenon nanobubbles in uranium dioxide over an atomic-scale time period of up to three microseconds (three billion integration steps). This was made possible by the optimal use of supercomputer power and modern codes. Such record-breaking molecular dynamics calculations have enabled direct observation of the Brownian motion of the bubble and discovery of a fundamentally new diffusion mechanism.

It was thought previously that the higher the gas concentration the slower the diffusion, as the gas interferes with the movement of the dioxide on the bubble’s surface . The authors showed that upon reaching a certain concentration the gas pushes the atoms of the crystal lattice to inter-nodal positions.

"By accumulating, the inter-nodal atoms form clusters that move rapidly around the bubble. The bubble and the cluster periodically push each other and thus move significantly faster than the bubble on its own. Thus appears a new effect - acceleration of diffusion by gas”, explains Alexander Antropov, a postgraduate student at FEFM (Phystech School of Electronics, Photonics and Molecular Physics at MIPT) and one of the authors of the study. The discovered effect will help explain the discrepancy between theory and experiment.

The work was performed at the Laboratory of Supercomputing Methods in Condensed Matter Physics, MIPT. The research in the Laboratory is based on combining methods of quantum and classical mechanics, statistical physics and kinetics with computational technologies. The use of state-of-the-art supercomputers and continuous improvement of numerical methods are very important to ensure high accuracy of calculations. However, modelling is just a tool that is useful only in conjunction with theoretical understanding of the nature of the processes taking place. This work is an example of how theory, armed with the most modern computational tools, makes it possible to find unexpected new phenomena "hidden" in the details of the microscopic structure of materials.

More detailed illustrations can be found below:

Figure 2. A processed version of a bubble of xenon. Only anium atoms displaced to inter-nodal positions are shown. This version illustrates better  how mobile a cluster of interstitial nodes is.

Header figure. Example of a computational cell: a crystal lattice of uranium dioxide (grey atoms are uranium, red atoms - oxygen) containing a bubble of xenon (yellow atoms). Uranium atoms displaced to inter-nodal positions are shown in black. Such a cluster of interstitial nodes greatly accelerates bubble diffusion. Provided by the authors of the paper. Credit: MIPT.