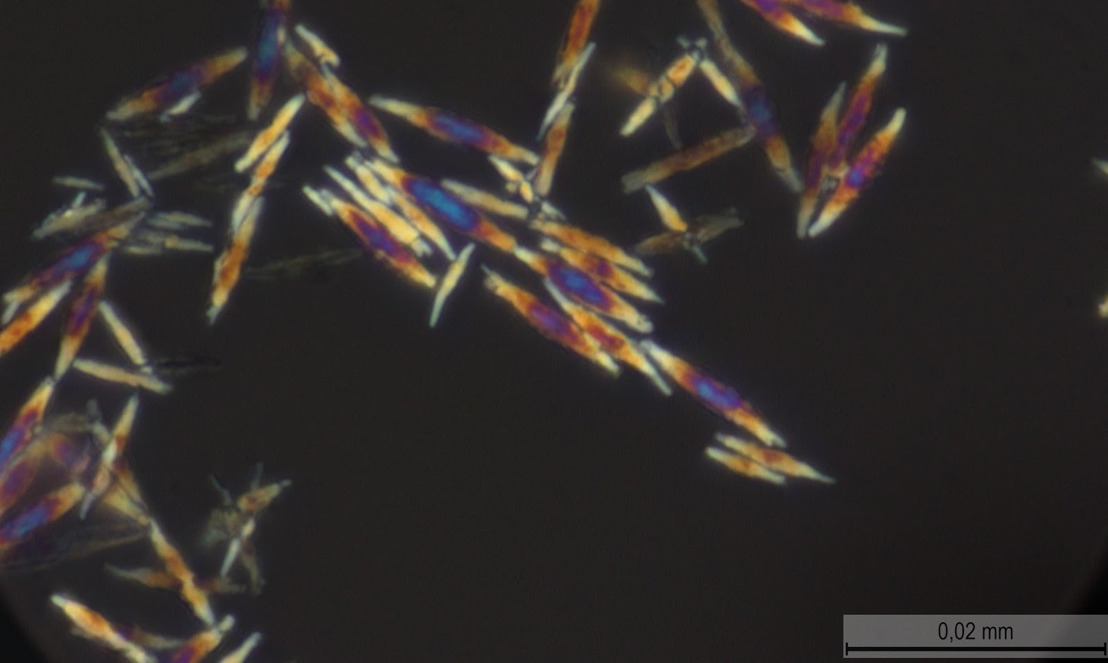 Scientists from MIPT and ITMO University and their colleagues have studied the formation and growth of crystals from simple organic molecules into large associations. These experiments will help create capsules for targeted drug delivery to specific tissues in the human body. The scientific paper was published in the journal Crystal Growth & Design.

Melamine cyanurate consists of melamine, colourless crystals, and cyanuric acid, whose molecules associate in a similar way to DNA formation. The various studies associated with it could be useful in developing techniques for introducing drugs into crystals with a similar structure. This will enable scientists to conduct experiments on targeted drug delivery, a technology which in the future will allow drugs to go directly to "targets", i.e. specific organ tissues, rather than be distributed throughout the body.

However, there are still many questions about the mechanism of molecular organisation at different stages of crystal growth.

“Our joint work is about an interesting effect: by varying the ratios of the initial components, it is possible to regulate the formation process and the appearance of the melamine cyanurate crystal," says Aleksandra Timralieva, co-author of the study and curator of educational programmes at the Infochemistry Scientific Centre of ITMO University, "We looked at the formation of a supramolecular complex of melamine cyanurate. Its formation directly depends on the local concentration of the components. It turned out that it is the control of proportions that allows us to control the growth of crystals and introduce other substances into them”.

The main calculations were done by MIPT scientists.

"One of the main activities of our laboratory at MIPT is molecular dynamics simulation, an approach that allows us to numerically describe and predict the behaviour of each individual atom in some, usually very small, volume of matter. From the computational point of view, such methods are extremely resource-intensive and require high-performance machines that can simultaneously use hundreds and sometimes thousands of individual processors to solve a single problem," explains Nikita Orekhov, deputy head of the Laboratory of Supercomputing Methods in Condensed Matter Physics at MIPT, - “In this work, armed with one of these supercomputers, we have tried to find out which types of intermolecular interactions are responsible for the formation of the primary melamine cyanurate nucleus in aqueous solution, the nanoscale group of molecules from which the crystal will later grow. In our future studies, these data will be useful for a more detailed understanding of the processes that occur during the formation of melamine cyanurate shells or closely related supramolecular complexes around the bioorganic molecules of interest.”

The experimental part took place in the laboratories of the Infochemistry Scientific Centre at ITMO University. The researchers studied how a change in concentration of one of the two components affects the formation of melamine cyanurate.

"We plan to conduct model tests with many organic molecules, for instance with antibiotics like tetracycline," explains Alexandra Timralieva. - Several supramolecular structures, especially melamine cyanurate, are very similar in their formation to the way DNA is formed. If we can understand the control of the formation of these structures, then we can move into the realm of the chemistry of the origin of life. The first steps have already been taken.”

Photo. Melamine cyanurate crystals in polarised light with 1:1 component ratio. Photo by the authors of the article from ITMO